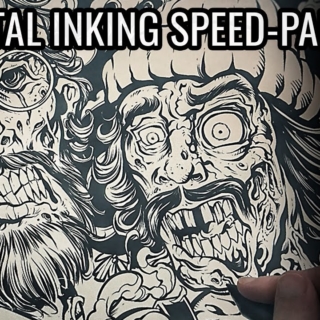 Silk-screen t-shirt illustration I created in tribute to the legendary Cheech and Chong from Up In Smoke with the characters as weed-eating, brain-smoking zombies.
I drew this artwork in Clip Studio Paint (Manga Studio 5) with a Wacom Cintiq. This is inspired by an illustration I created years ago – I wanted to test out my new skills, and design something that was more fitting for a t-shirt and filled out the front more (the previous design was too square). I also wasn’t happy with the likeness of the characters in the first design, so I drew everything from the ground up, and added a lot of elements from the films and really tried to do my best to capture the spirit of these marijuana legends. 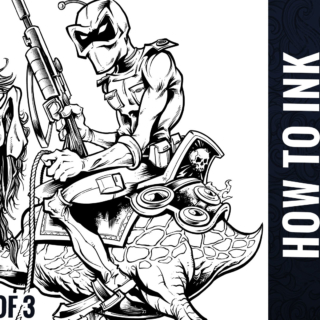 If you would like to purchase any of the brushes I used in this tutorial, they are available at http://ClipStudioPaintBrushes.com

Follow Brian and check out more of his work: 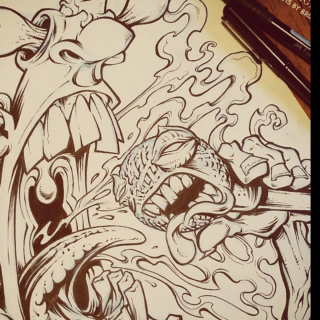 This New YouTube video shows how I traditionally ink by hand with a Pentel brush pen for t-shirt design.

This is a T-Shirt illustration of a hip-hop singer gripping a mic spewing bad breath fumes I created for a hip-hop apparel brand called Unik Sovaj. 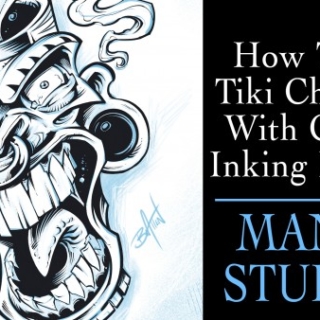 Video 2 of 3
This video shows how to digitally paint a colorful tiki head using my new set of custom Manga Studio brushes available for download for only $2.99.

Per request, I slowed this video down and added commentary to walk you through step-by-step the process I use to ink a piece of artwork.

-What brush settings and brush presets I use when inking

-Start with the outlines or key lines when inking, and then go back in and add rendering and shading.

-Recommendation of the Razer Nostromo gaming pad for digital artists

-Being careful not too add too much detail and rendering – remember that you need to leave room for the coloring!

I hope you find it helpful! Please post questions in the comments.

Client Testimonial:
Incredible job on this. I knew you’d create something amazing , and holy crap is this good.
-Mike Schiff
Mas Productions

This video uses a custom set of 100 Manga Studio 5 brushes available for purchase here for $2.99:

MUSIC BY:
Roadside Funeral
Special thanks to the talented Jeremy Bratton for allowing me to use the tunes from his band’s new self-titled album. If you dig the tunes, please purchase here: https://roadsidefuneral.bandcamp.com/releases 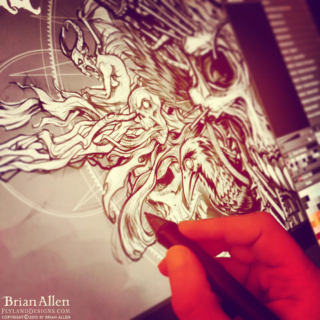 Speed-Inking Tutorial video I created for the process of digitally inking an album cover for the Brazillian band John Wayne in Manga Studio 5 (Clip Studio Paint) with a Wacom Cintiq 24HD.

The album cover I illustrated was for the Brazilian heavy metal band John Wayne (named after John Wayne Gacy – not the other guy). It was a great pleasure working on this with the band, as they gave me a lot of freedom, and I set upon the design without much planning, and tried to let it flow. This album cover is the first in a set of two albums, that when placed together will form one cohesive image. This album represents the dark side, while the following album will have a similar design, but mirrored, and “lighter.”
You can purchase the album here:
https://www.facebook.com/BandaJohnWayne

Here’s a inking tutorial for a hot-rod t-shirt for Commando Racing. Check out the shirt at (http://commandoracing.com/t/shirts)

I created this fun t-shirt design for Commando Racing Gear – a hardcore skeleton! We went through a couple different [and equally exciting] designs but eventually settled on this one. I had a lot of fun with this!

Thanks for watching, please post any questions in the comments.

–What software do you use?
Manga Studio 5 EX and Adobe Photoshop CC

–What tablet do you use? Wacom Cintiq 24HD, and sometimes a Wacom Companion 1

–What computer do you use?
iMac

–What brushes do you use?
I use variants I created from the stock brushes in Manga Studio 5, as well as brushes I purchased from Ray Frenden.

–How much time does an illustration take?
Projects vary greatly, but I would say a good average would be 8 hours.

–People actually pay you to do this all day?
I know, right? 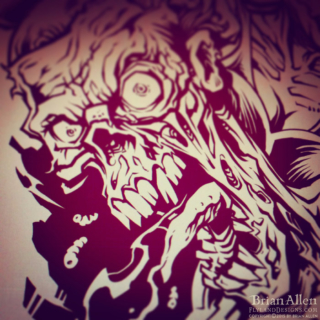 Here’s a video of how to ink for a laser-cut skateboard.

I was recently hired to conceptualize and illustrate a team of Superhero zombies to be laser-engraved into skateboards by Revenga (www.revengaskateboards.com).

While designing, I also had to structure the design so the layout could be changed to fit a T-Shirt as well. I made sure to keep the characters masked on separate layers, that way moving them around at the end was relatively easy.

We also created a silk-screen color version for boards and shirts, using around 6 colors.

Thanks for watching, please post any questions in the comments.

To check out more of my work, or to hire me:

–What software do you use?
Manga Studio 5 EX and Adobe Photoshop CC

–What tablet do you use? Wacom Cintiq 24HD, and sometimes a Wacom Companion 1

–What computer do you use?
iMac

–What brushes do you use?
I use variants I created from the stock brushes in Manga Studio 5, as well as brushes I purchased from Ray Frenden.

–How much time does an illustration take?
Projects vary greatly, but I would say a good average would be 8 hours.

–People actually pay you to do this all day?
I know, right? 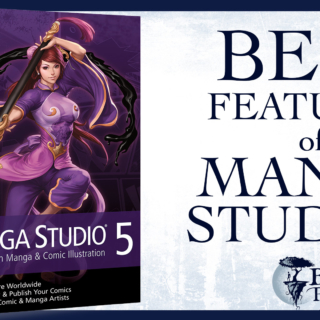 I’ve been using Manga Studio 5 for over a year now, and I love it. I set out to make a quick YouTube review of it, and “quick” quickly turned into over 15 minutes of me rambling. There are so many cool new tools and features in MS5, that it was really hard to fit them all in.

Manga Studio 5 sets out to out-shine Adobe Photoshop as a digital painting and drawing software, and in my opinion, it does that beautifully.

I find it far more enjoyable to use than Photoshop at painting, drawing, and especially inking. It blends the intuitive painting and blending engines of Corel Painter with Adobe Photoshop’s intuitive interface and power.

Here’s a sample of some of the artwork I created in Manga Studio 5: 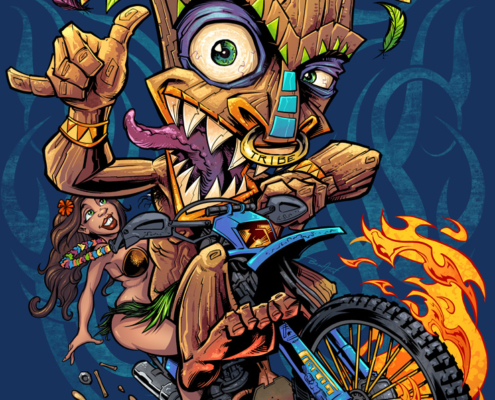 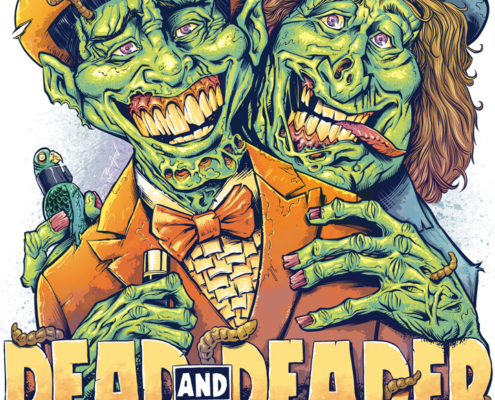 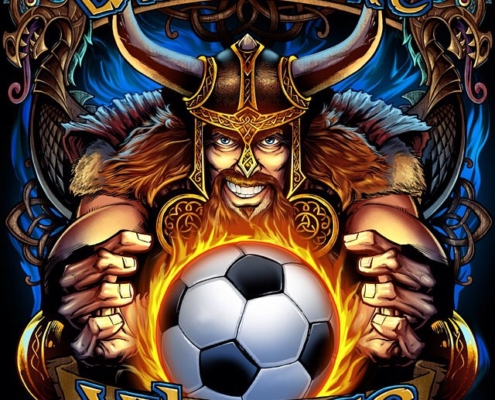 Features that you won’t find in Adobe Photoshop

Improvements made from Manga Studio 4

Thanks for reading! If I’ve missed any features, or if you have any questions, please leave them in the comments section.

To check out more of my work, or to hire me: 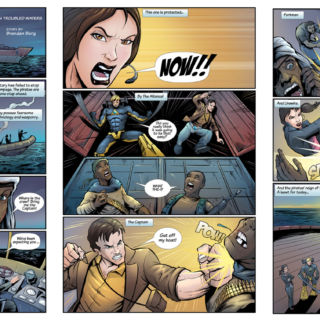 I just finished Issue #2 of a promotional comic series for Consol Alliance, a shipping company in Australia. Here’s a step-by-step look into the complicated process of how I create comic book art.