Check out a few of my favorite freelance projects: 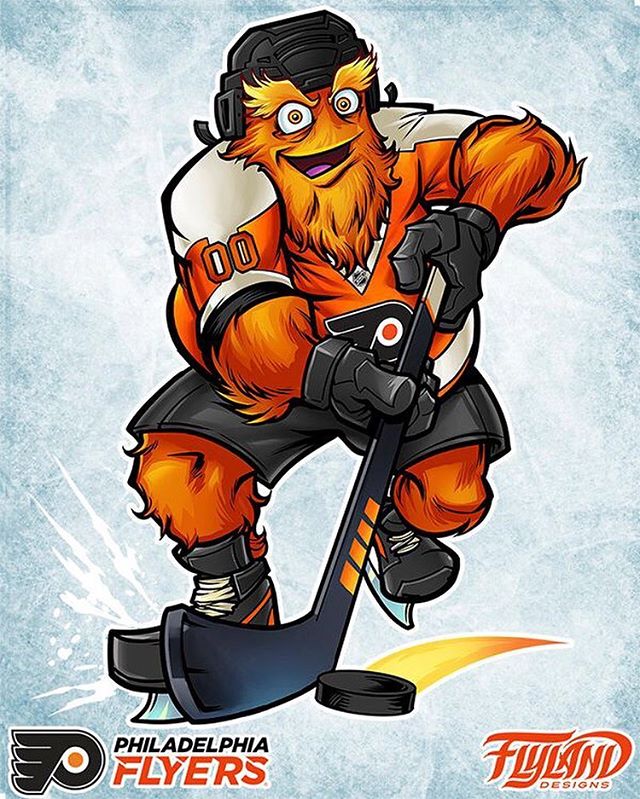 We began by sketching out over twenty different concepts, from Bulls to bats, flying barons, monsters, and dragons. We decided on a big fluffy, friendly monster named Gritty. I then fine-tuned the sketch of Gritty over several iterations using Clip Studio Paint and a Wacom Cintiq – we experimented with adding wings to the mascot of all different types, and even a tail. Working digitally really helped speed things up and quickly experiment with different body parts and expressions.

The front, back, and side turn-around illustration was then sent to Character Translations Inc., who used my drawings to create the costume in real life. It was such an amazing and humbling experience to see my creating come to life! A once-in-a-lifetime opportunity to be sure, to leave my mark on the NHL. It will be interesting to see how the mascot is received among fans – the Flyers were one of the last teams to get a mascot, and some of the fans have resisted. I hope that they like it, or I may never be able to show my face in Philadelphia again!

The team was great to work with, and even sent me and my family to a game to meet Gritty in person! 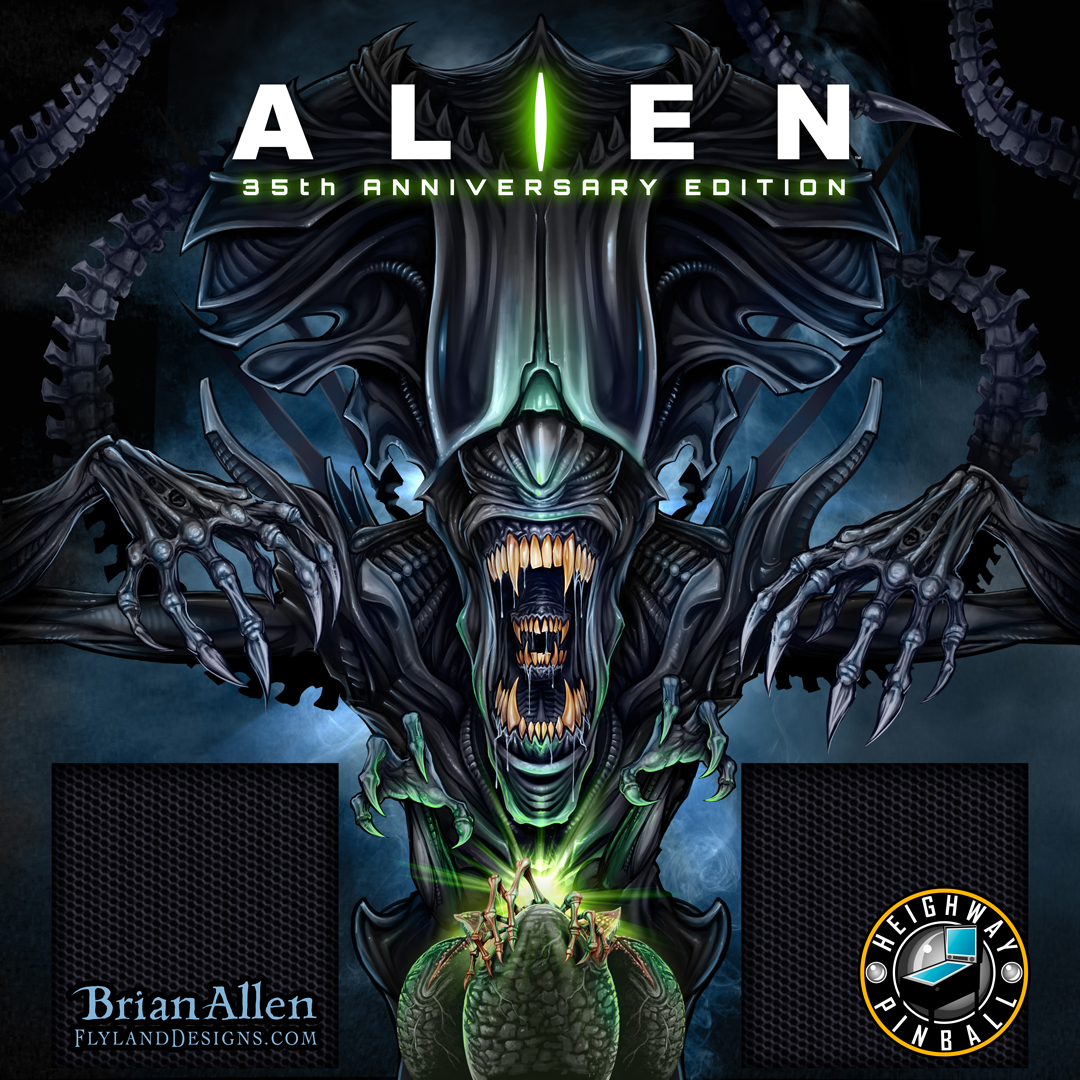 Easily one of my favorite projects ever! Official Alien illustration I created for the backglass of the new Limited Edition Pinball Machine licensed from 20th Century Fox and built by Heighway Pinball.
We had to turn this around on a super quick deadline, racing to release the artwork on Alien Day in 2017. The illustration is huge – twenty eight inches square, so I had to pump a ton of detail in every nook and cranny. HR Giger, the genius behind the Alien creature concept, was one of my very first artistic inspirations when I was a kid, so it was a great compliment to be able to play around in his shadow a little.

I’m selling signed prints of this artwork in my shop – check it out!

You can purchase a signed print here:

Super humbling to be able to work for one of my childhood heroes, Hulk Hogan.He owns a beach shop down in Florida, and liked my colorful beach graphics.We created a few designs for his shop that involves their Shark mascot punking the Hulkster in different ways.Very easy guy to work with, and tons of fun, BROTHER! 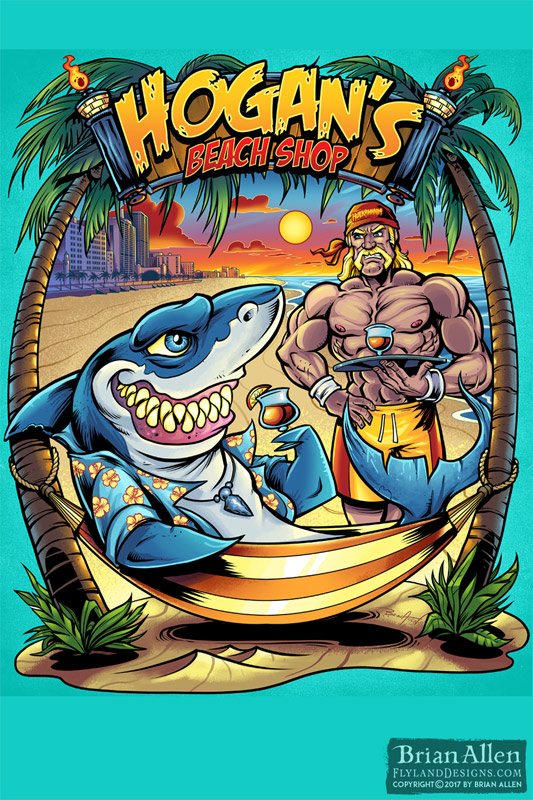 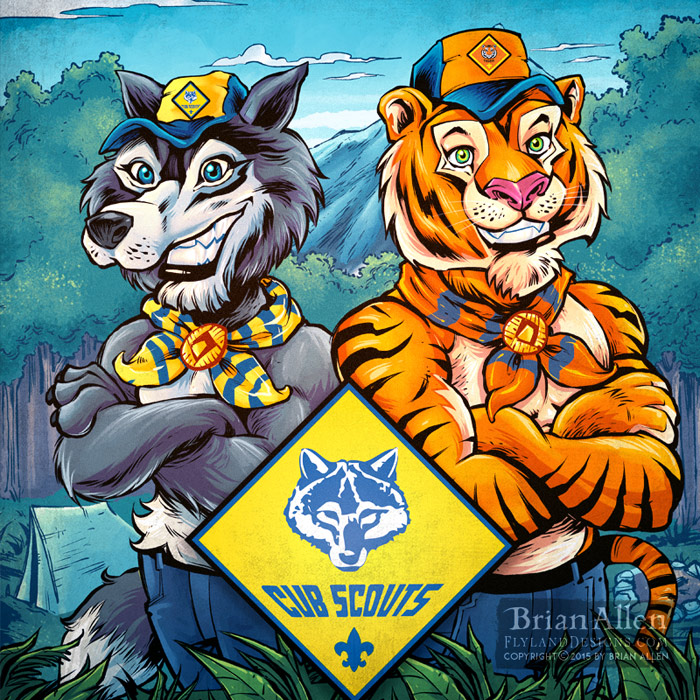 I was thrilled recently to work with Boy Scouts of America illustrating their Bear, Wolf, and Tiger mascots for a catalog that went out to all troops nationwide.We created illustrations that blended real studio photos of kids in Boy Scouts gear, and drawn into a comic book background. The marketing team hired me to reinvent the existing mascot illustrations in my own style. I was a Cub Scout long ago, so it was a lot of fun to leave a little mark on the organization.

One of my favorite recent projects involved creating a series of labels for these disc golf frisbees by Discraft for their Halloween catalog.We took their famous Bee mascot, and drew him in the likeness of famous movie monsters, like Leatherface and Jason from Friday the 13th.We also created a one-color foil version too. 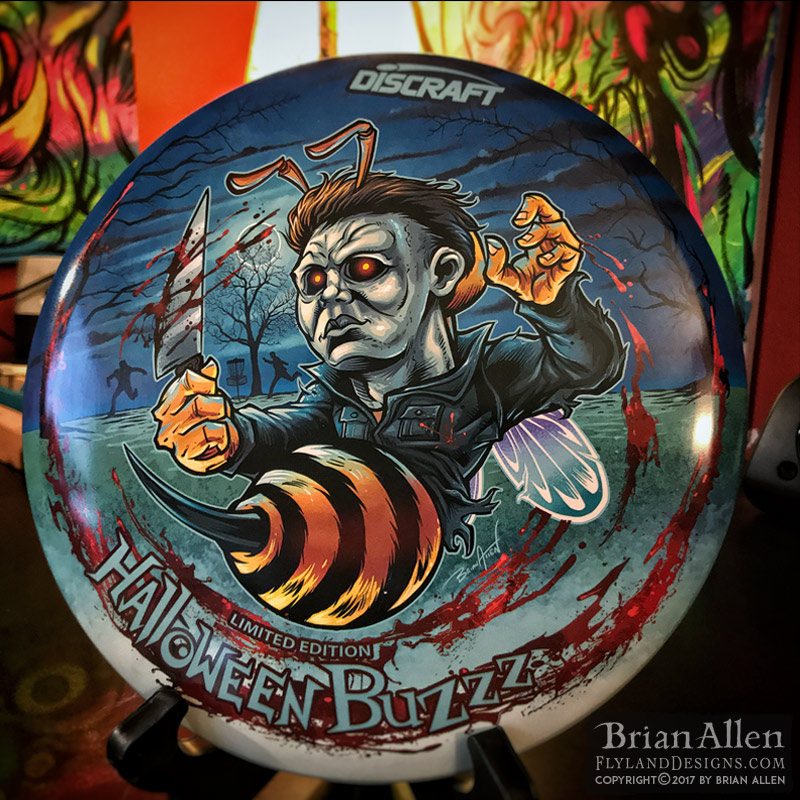 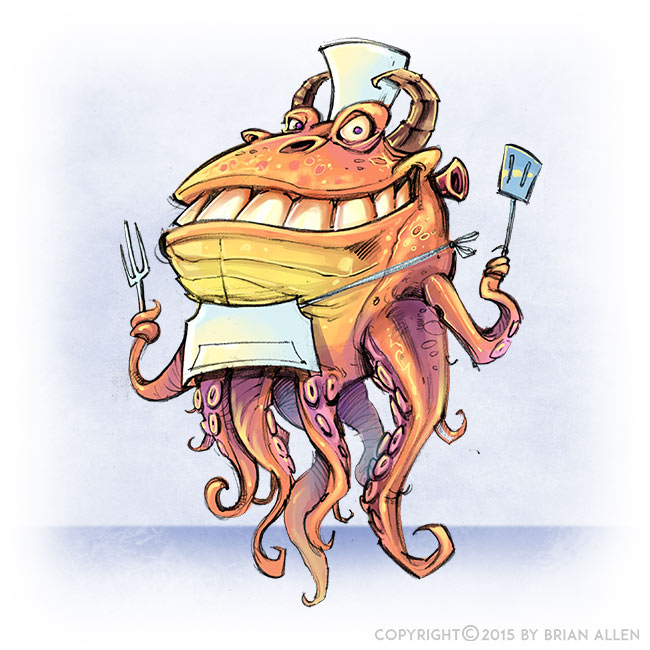 The nice folks at Scholastic hired me to draw concept illustrations for characters in a redesign of an educational app called Sushi Monster, in which kids solve math problems with a friendly but terrifying sushi chef. I explored a lot of different character sizes, shapes, and attitudes. We initially thought the best direction would be to create the main characters as zombies, and the supporting characters as other types of monsters. Unfortunately, due to a gypsy curse, the project was cancelled in the early stages before we had a chance to really get going.

Album Cover Illustration for The Jokers

This is a fun album cover illustration I created for a hard rock band called the Jokers for their new album, Hurricane. The idea was to have the band in a classic-looking car flying through the air to their next gig, and causing a hurricane behind them, destroying London below them. I tried to hide a lot of detail into the design swirling around them in the hurricane, like roadies, amps, guitars, and british artifacts. The band needed the album art in a really short amount of time, but we pulled it off in time, and they were quite happy with the result.

Client Testimonial:
“…it all looks amazing, we are really really happy with the final product.”
-Paul Hurst
The Jokers 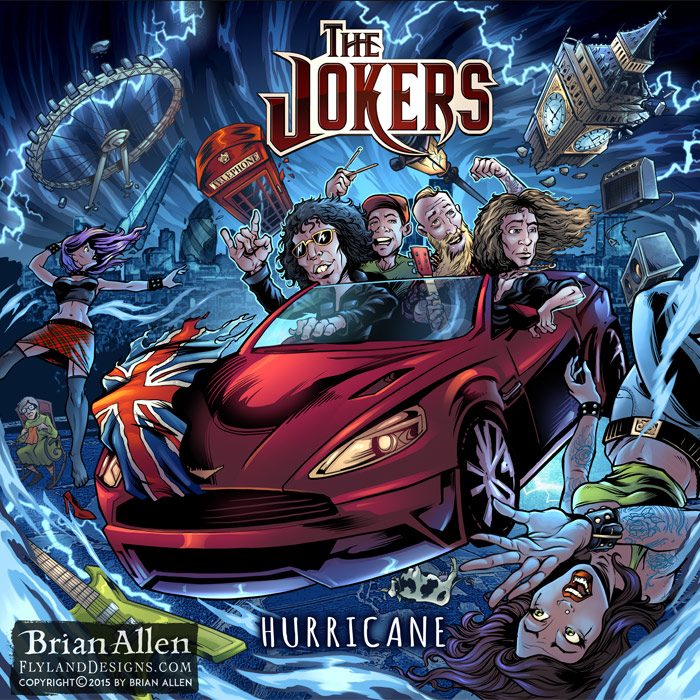 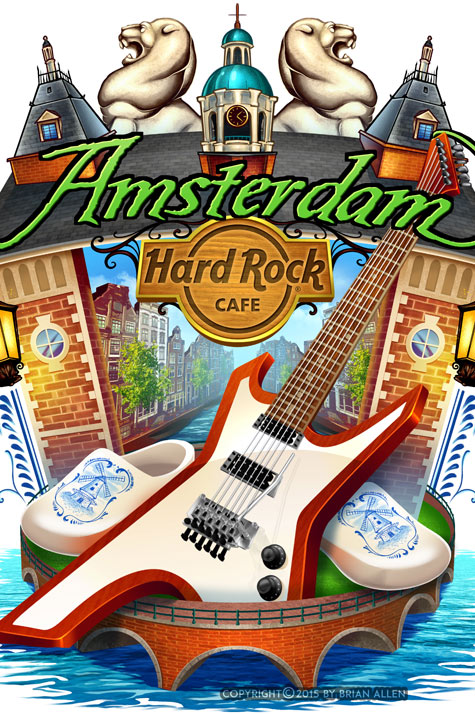 T-Shirt designs I illustrated for Hard Rock Cafe, in conjunction with Tremendous Graphics. I had the privilege of designing the shirts for many iconic cities for each of the Hard Rock shops from all over the world, including Tokyo, Miami, Yankee Stadium, Amsterdam, and more.

The Art Director provided me with a detailed brief of each city, and a list of items and landmarks that Hard Rock Cafe thought would best convey the character of each city. I then drew up three detailed thumbnail sketches for each design, and sent them to the Art Director for approval. Once the best sketch was picked and refined, I set out illustrating the design in a combination of Manga Studio 5 and Adobe Photoshop using a Wacom Cintiq 24HD. It was a fun challenge to squeeze in so many different elements, while trying to keep the design from becoming too busy.

Silk-screen t-shirt illustration I created in tribute to the legendary Cheech and Chong from Up In Smoke with the characters as weed-eating, brain-smoking zombies.
I drew this artwork in Clip Studio Paint (Manga Studio 5) with a Wacom Cintiq. This is inspired by an illustration I created years ago – I wanted to test out my new skills, and design something that was more fitting for a t-shirt and filled out the front more (the previous design was too square). I also wasn’t happy with the likeness of the characters in the first design, so I drew everything from the ground up, and added a lot of elements from the films and really tried to do my best to capture the spirit of these marijuana legends. 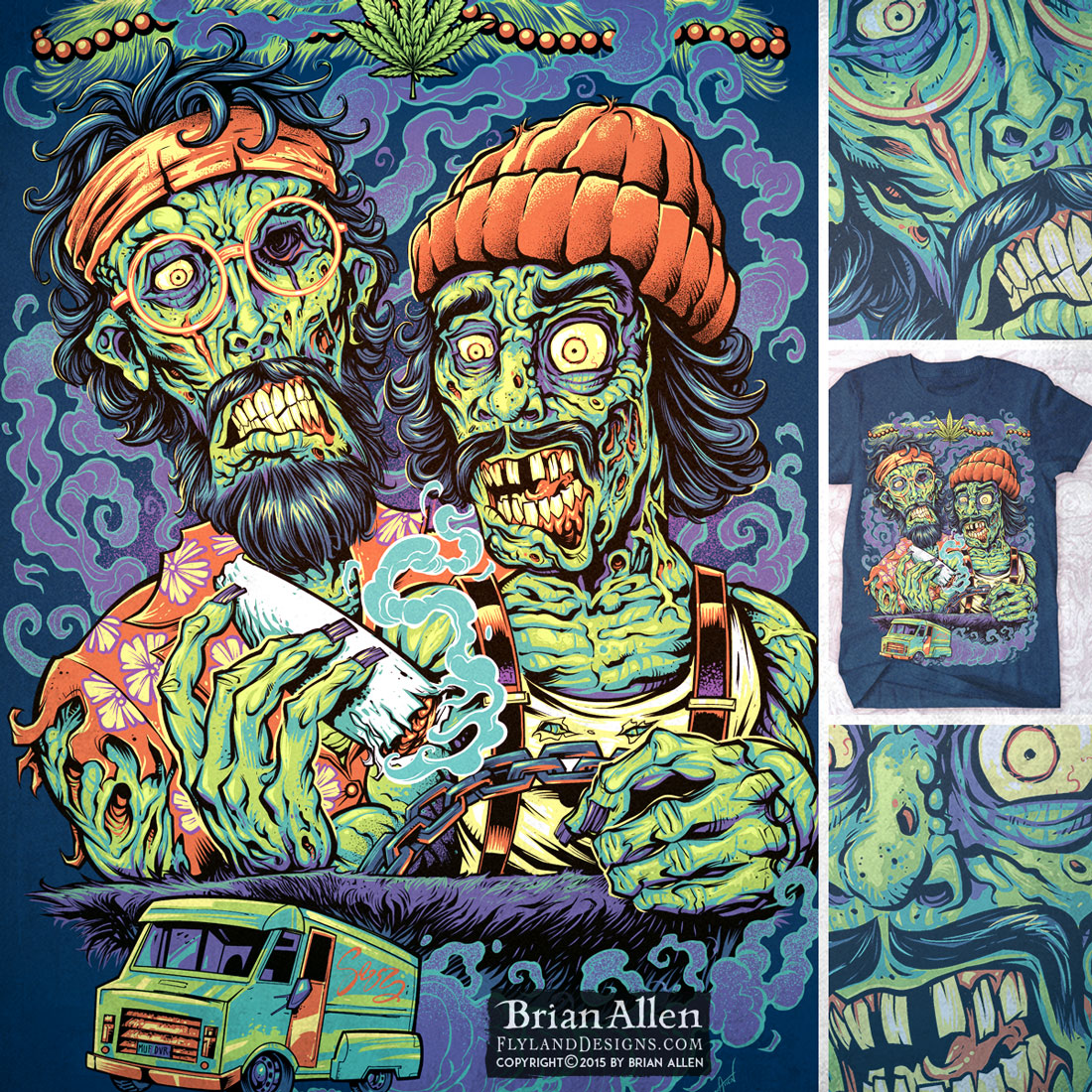 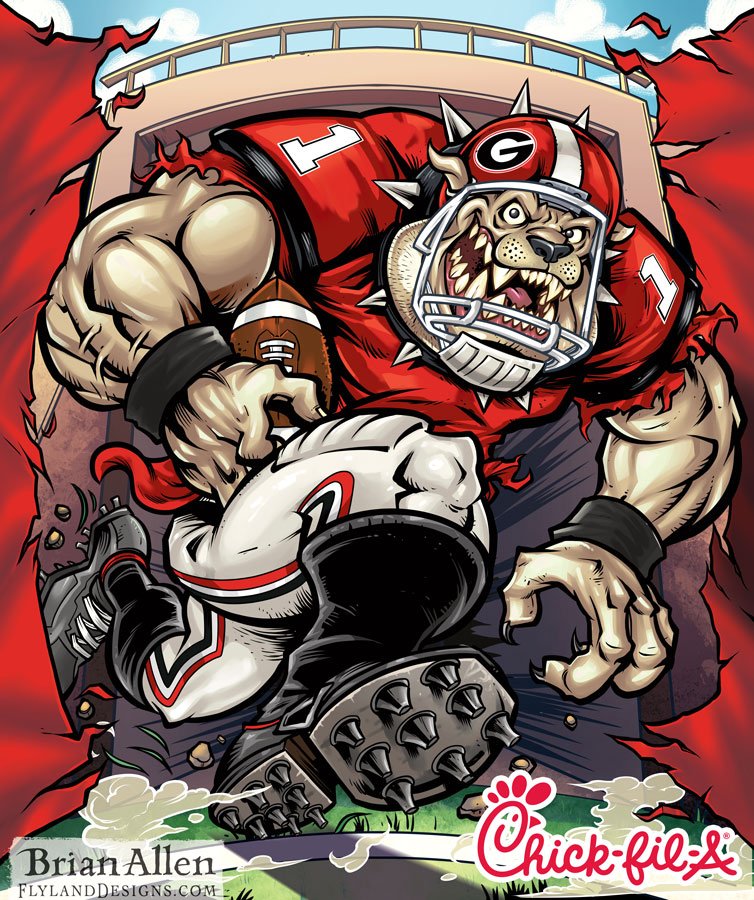 The Award-Winning marketing agency McCann of New York hired me to reinterpret the iconic Auburn and Georgia mascots in my own style for graphics that wrapped a massive Chick-fil-A pop-up restaurant on the Georgia/Alabama state line.

My artwork was featured in a nationally televised television commercial created by Chick-fil-A to showcase the #RivalRestaurant marketing event. Chic-fil-A was so happy with the artwork I created, they printed the artwork on signage, apparel, and giant wooden cut-outs at the event.

Check out the Nationally Televised commercial here featuring the artwork:

A set of skateboard designs featuring vicious aztec, tiki, and monster faces. Reade and willing to grace the underside of any truly gnarly skateboard.

These designs are available for licensing and customization!

This artwork is available for licensing: 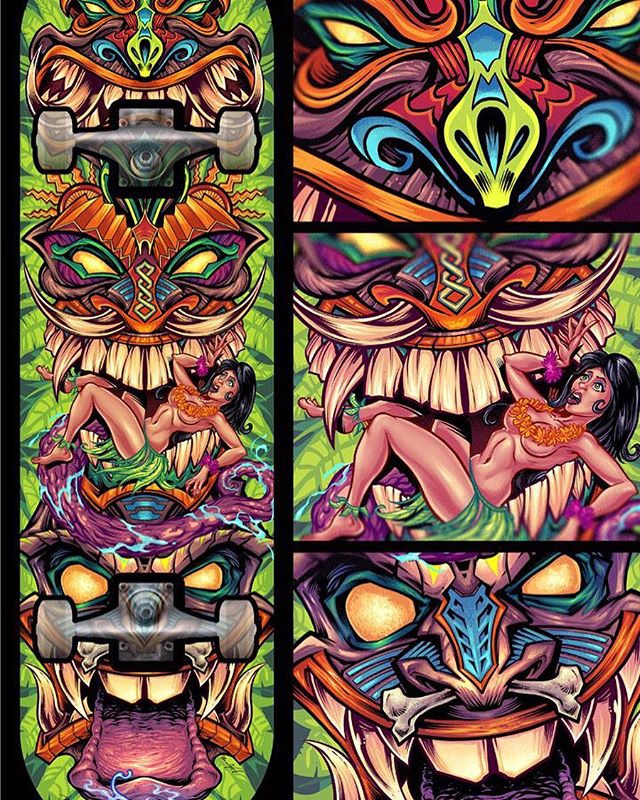 I work with apparel brands, entrepreneurs, retailers, heavy metal bands, and many other types of clients. You can hire me to illustrate and design T-Shirts, posters, album covers, graphic decals, comic books, and even websites and ipad apps.

Even when the subject matter of the illustration is dark, I like to try to squeeze in a little humor into everything I do. I’m a big fan of classic monster movies, and the art direction of 80’s style toys and games, and generally anything that is creepy and a bit goofy at the same time.

If there is a skull or a zombie involved with your project, chances are, I’m interested in working with you.

Custom artwork for your project:

My dark illustrations have been used for many different applications, including:

So Let’s Do This!

Check out my other portfolio categories