Project
The Philadelphia Flyers, the NHL hockey team, hired me to design the costume for their new mascot, completely from the ground up. They reached out to me because they had liked some edgy mascot artwork I had done for a television commercial by Chick-Fil-A.

The Flyers gave me a lot of freedom with the design. They had previously commissioned some designs, but nothing had hit the mark yet. They told me that the mascot design had to be “someone you’d want to high-five, but not hug.” He had to be fun enough to attract kids and younger fans, yet had to still be tough enough to earn the respect of the tough and gritty Philadelphia fans.

I began the project by sketching over 20 different possible mascots, including, bats, bulls, groundhogs, dragons, tough guys, yetis, and even a flying squirrel.

Once the client saw the sketches, they picked a big dumpy monster I had drawn as the starting point.

Early on, we still hadn’t decided on a name for the mascot. The Marketing team decided on Gritty, which is a perfect fit. 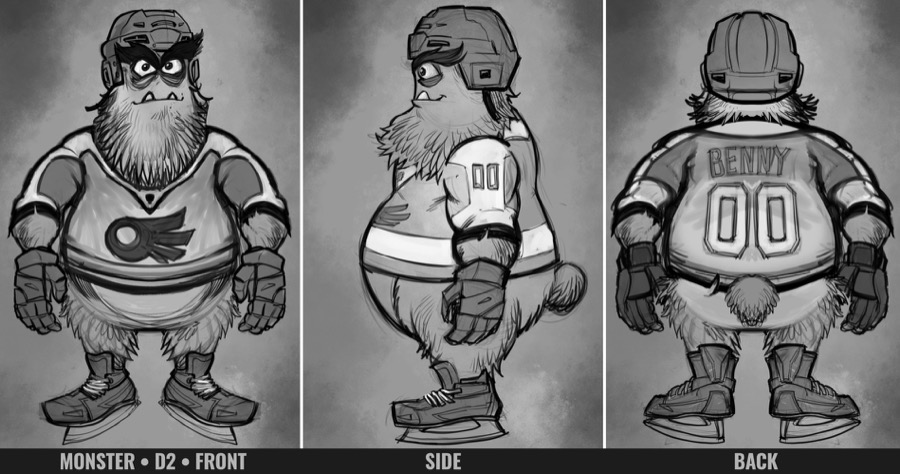 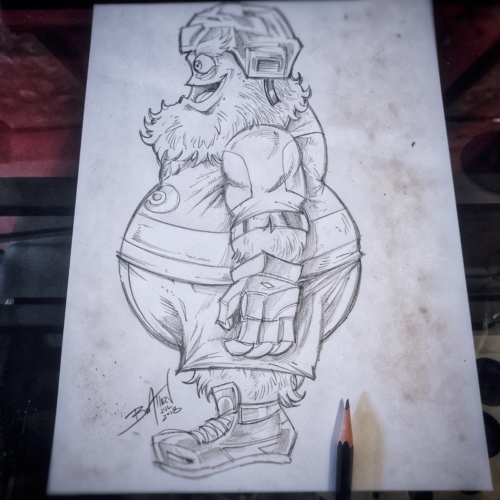 Pencil Drawing of Gritty, Side 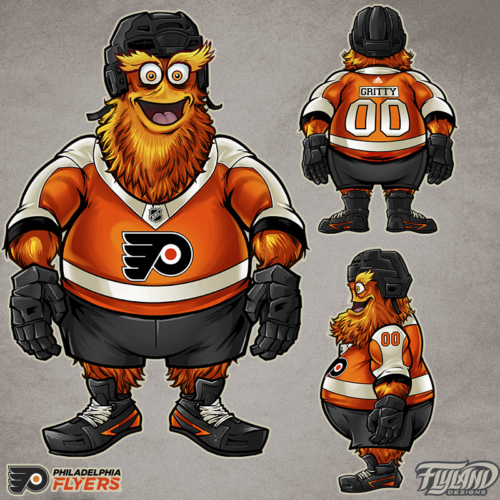 After we nailed down the foundation of Gritty, the Art Directors and I experimented with many different variations to tweak Gritty’s look.

Working digitally with a Wacom Cintiq tablet, Clip Studio Paint, and Adobe Photoshop, I swapped different details on Gritty, including:

Once approved, this front, side, and back view of Gritty was submitted to Character Translations Inc. so they could begin work on the costume.

Additional poses for the mascot 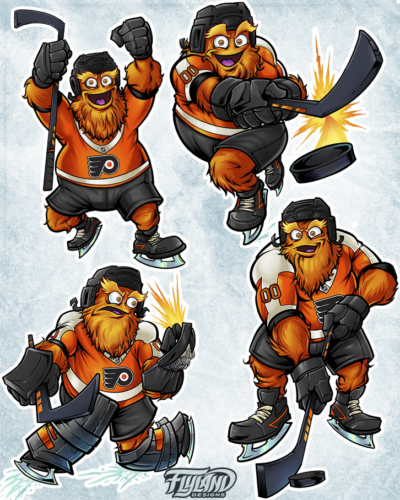 Once the concept phase was over, the Flyers hired me to create a series of 10 different poses showing Gritty in action. The different illustrations were to be used primarily for promotion during the rollout.

The mascot illustrations were also used for merch designs sold at the Flyers’ stadium and online – from t-shirts, hockey pucks, sticks, and keychains.

Gritty introduced to the world! 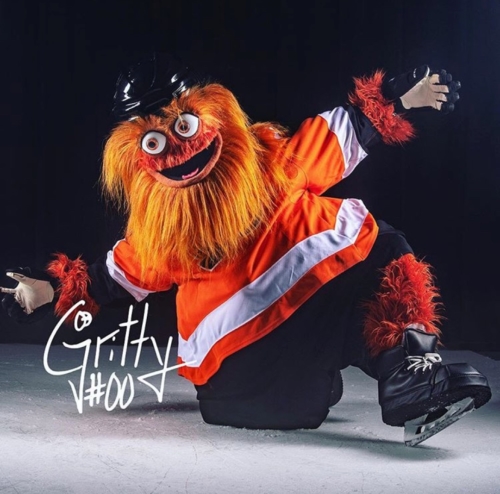 Periodically throughout the process, the Flyers would send me photos of how the costume was coming together, but I usually only saw pieces. It wasn’t until just a few days before the official release that I saw Gritty for the first time. The costume creation team at Character Translations Inc. did an amazing job bringing my drawing to life.

Some of Gritty’s most unique features, such as the googly eyes, and squeaky hands, were added by the creative team at the Flyers. I was just as surprised as everyone else when they were first revealed!

The initial reaction seemed negative at first, and it was a little overwhelming. But the momentum changed very quickly. Within a couple of days, people were sending me fan art they had created of Gritty, and it was clear he had become more than just the mascot for the Flyers: he was now the mascot of the internet!

Client Testimonial:
Thank you again for all your great work throughout the project! Appreciate the quality work, quick turnarounds and accommodating the many changes we sent your way.
–Ben DiCandilo
Philadelphia Flyers, Marketing Manager 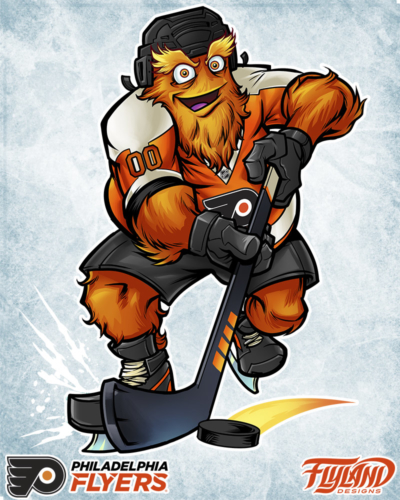 I owe a large debt of gratitude to the Flyers for making me a part of something so big (and orange!).

Thank you to the Marketing Team – They had great ideas and clear communication.

Thank you to the costume company for their incredible work!

And thank you to the man inside the Gritty suit, who has really brought this two-dimensional drawing to life!

The full story behind the creation of Gritty:

Interview by Mark Brickey on the popular art and design podcast, Adventures in Design

I go into full detail of the process of how I designed Gritty with the Flyers, and how I dealt with the outpouring of reactions to the mascot I helped create, both negative and positive. Adventures in Design is a really great podcast that has interviewed many of the best artists in the industry, so it was an honor to be included!

Interviews and Press about the creation of Gritty:

Gritty took the world by storm, and I was very fortunate to be part of it. It was really humbling to be interviewed by over 20 news outlets, several of them on camera, and to be a guest on my favorite art podcast, Adventures in Design.

The 15 Best Marketing Stunts, Activations and Odd Creations of 2018

Gritty, the Flyers’ new mascot, is up to all sorts of shenanigans on his 1st night out

Gritty, Stuff Of Nightmares, Has Been Officially Welcomed To Philadelphia

Gritty: why the Philadelphia Flyers’ new acid trip of a mascot must be stopped

TRUE GRITTY, OR HOW A MYSTIFYING NEW NHL MASCOT WON THE INTERNET

Are You In or Out on “Gritty,” the Philadelphia Flyers’ New Googly-Eyed Mascot?